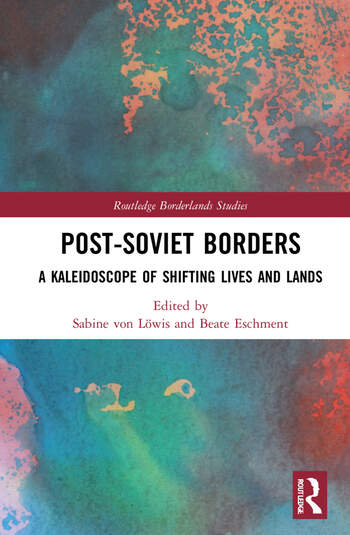 The Russian-Georgian war of August 2008 resulted in a massive increase of Russian military presence in Georgia’s South Ossetia region. An estimated 4.000 (only 4th Military Base) to 5.000 military personnel (3.500 4th Military Base, 1.500 border guards, source, source2) are deployed in the region. This is a tenfold of official Russian (“peacekeeping”) presence prior to 2008 and with much stronger warfare equipment. According to the latest data just 53.000 people live in the area. This page visualizes some of the Russian presence and its expansion over the years in South Ossetia, based on public material available.

In 1992 a cease-fire was reached through the Sochi Accords that ended the Georgian-Ossetian civil war of 1991-1992 . This also established the Joint Control Commission (JCC) and the Joined Peacekeeping Force (JPKF). It was the start of post-Soviet Russian military presence in South Ossetia. The JPKF was commanded by the Russians, and was composed of 1.320 troops: Russian Federation (500), Georgia (320), and North/South Ossetia (500). In the period prior to the 2008 war the JCC and JPKF degraded in its functioning and ceased to exist after the war.

The August 2008 Russian-Georgian war ended with the six-point agreement upon mediation by French President Nicolas Sarkozy on behalf of the EU.  This stipulated, among other things, “Russian armed forces to withdraw to the positions held before hostilities began in South Ossetia”, the source of dispute between Russia and Georgia (and most of the international community) since then.

Two weeks after the agreement was signed Russia recognized the independence of South Ossetia (and Abkhazia). In September 2008 the EU and Russia worked out the six-point agreement in terms of deadlines and implementation of observer missions. It was at the subsequent press conference the separate visions on withdrawal became clear.

Russian President Medvedev said: “Russia will withdraw in full its peacekeepers from the zones adjoining South Ossetia and Abkhazia to the positions where they were stationed before the start of hostilities”. While Sarkozy stated: “…within a month Russia’s Armed Forces will have left Georgian territory”.  In the vision of Sarkozy that included both regions as he repeated the EU’s position on the status of the regions as inseparable parts of Georgia.

Russia was quick to announce in september 2008 roughly 7.600 troops would be deployed equally divided over both regions.  Since that moment Russia has rapidly expanded its military infrastructure in South Ossetia to host troops and equipment which was also expressed in an agreement formalizing the 4th Military Base in South Ossetia. In a second stage it has built compounds for the families of the military personnel on long term deployment.

In March 2015 the Kremlin and the de facto leaders in South Ossetia signed an “Alliance and integration Treaty”, effectively integrating the security forces (including border security) of the Ossetians into the Russian structures. Among other things. The full merger of the Ossetian forces into the Russian forces was formalized in 2018. In other words, South Ossetia has become a protectorate of Russia.

The main base of Russia’s Armed forces in South Ossetia is the 4th Military Base in the western outskirts of Tskhinvali. This vast complex opened in February 2009, together with residential housing north from the base. In 2011 expansion took place on a free plot north from the base compound, and various minor expansions within the existing perimeters of the base.

In 2012 construction of a compound with family apartments was finished just south-east from the main base, and in 2013 a military compound was constructed within a city block. A substantial enlargement took place in 2015 on the west side of the base. The capacity of the base is estimated at 4.000 troops. According to an official statement in April 2020 more than 450 South Ossetians serve at the 4th Military base under Russian command.

Java (or Dzau in Russian and Ossetian references) is the main town of the Java / Dzau district in central South Ossetia near an important junction of roads. It is located along the route from the Roki tunnel at the Russian border, the sole access road to and from Russia. The town is outside of the 15 km conflict zone as determined by the JCC, and was under control of the South Ossetians by the time the 2008 war broke out.

Russia secretly rebuilt the supposedly disbanded Ugardanta military base here since 2006, outside of the JCC mandate. The area  was not under international monitoring and the construction went unnoticed. The base played an important strategic role in Russia’s invasion in 2008. Java maintained its importance for strategic deployment of Russian troops and equipment after the war; the military infrastructure rapidly developed into the second largest in South Ossetia. The complex is part of the 4th Military Base that has its main site and command line in Tskhinvali. 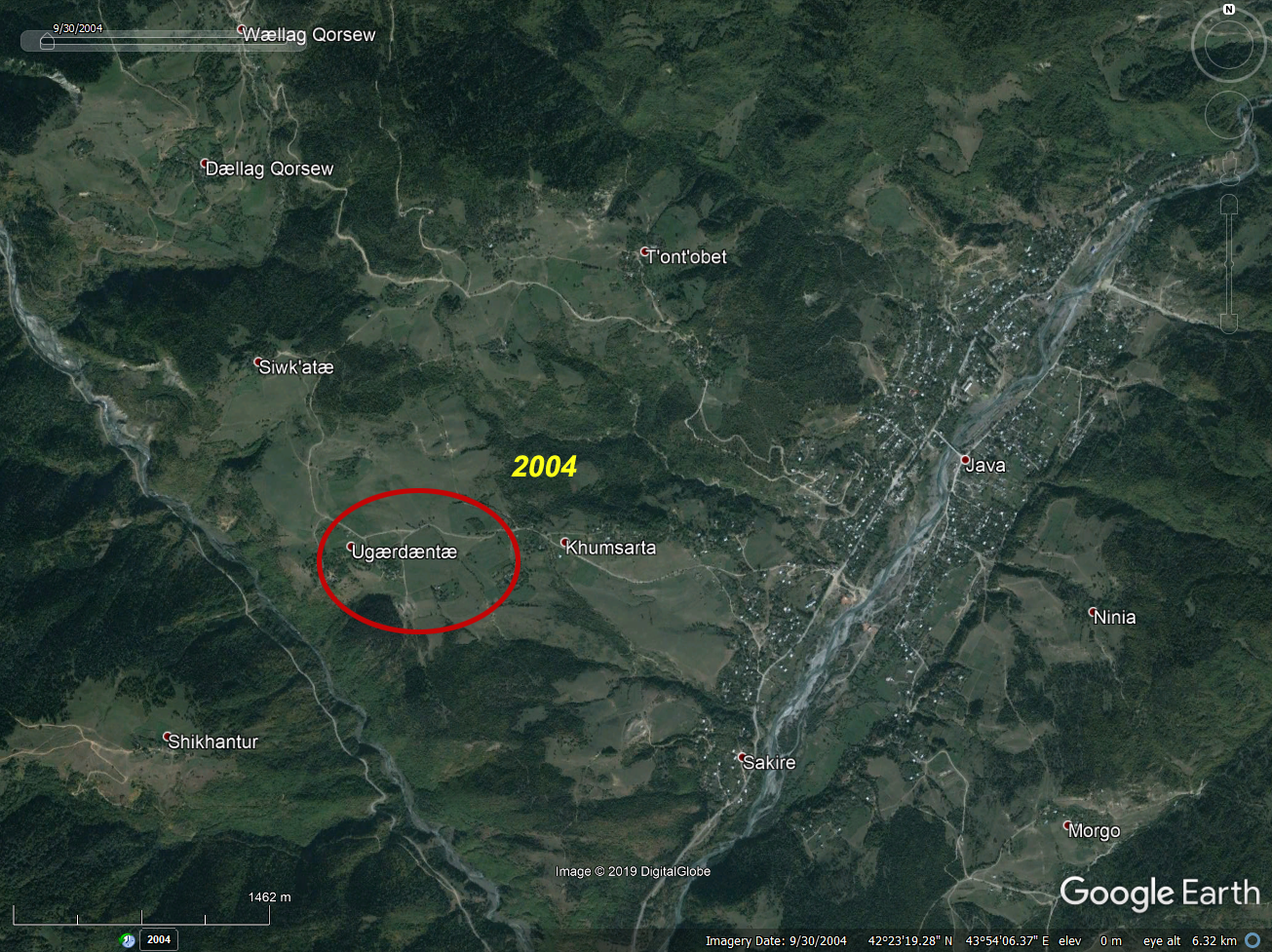 Java in 2007 – Ugardanta Military Base 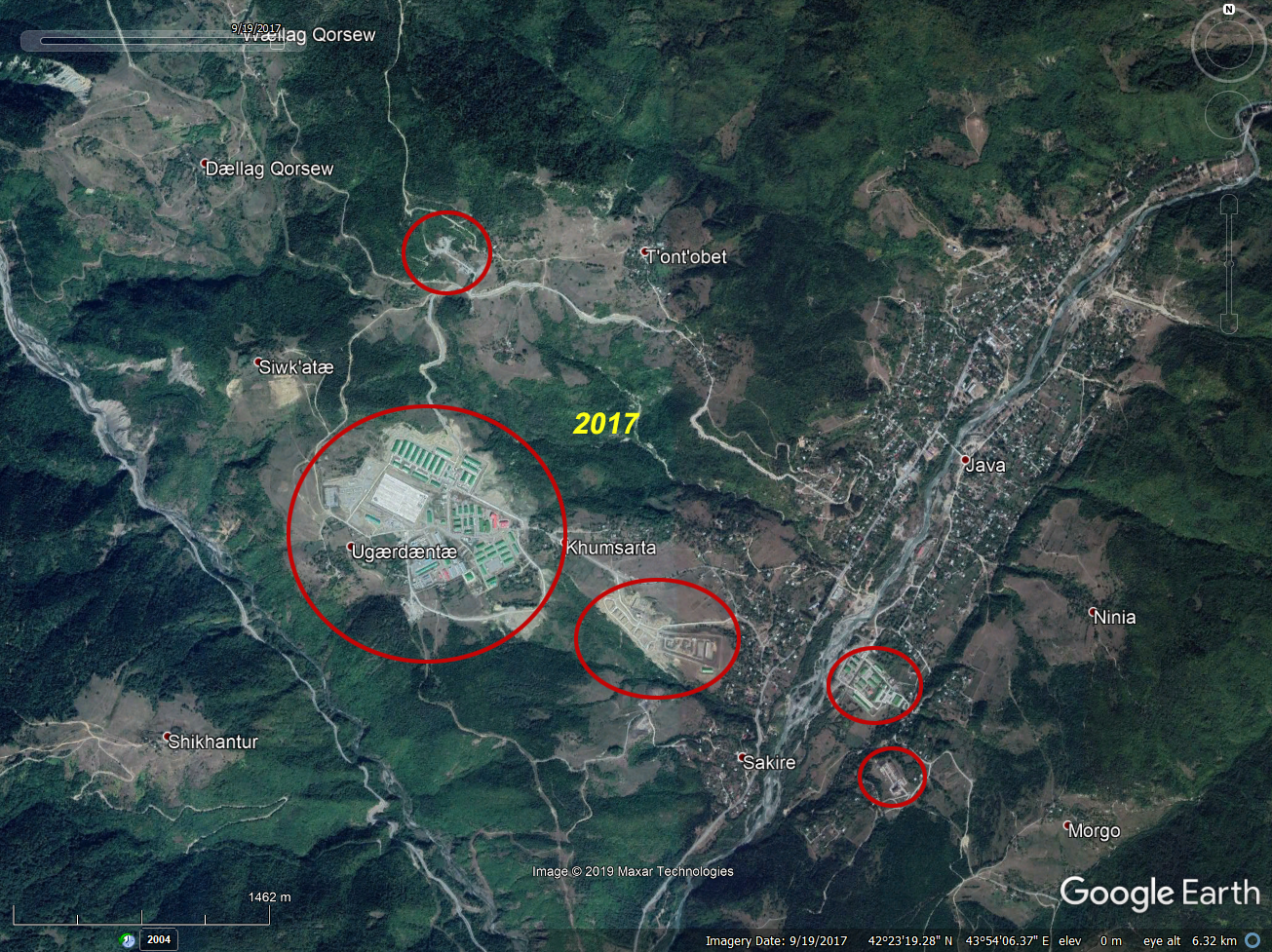 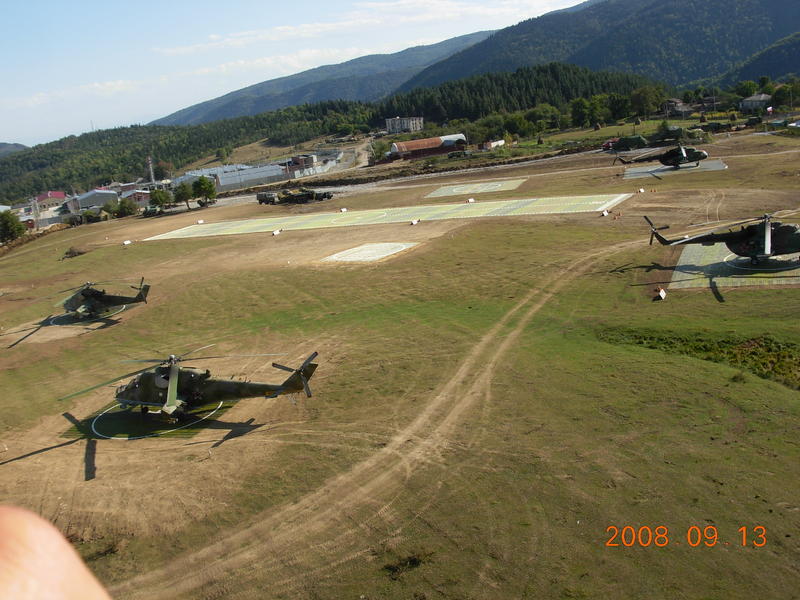 Early Java base in September 2008 Along the Administrative Boundary Line a string of “border guard stations” have been constructed since 2009. These bases take care of patrolling and monitoring the ABL, adding physical barriers (such as barbed wire, fences and trenches) with a function to “enforce the international state border” (the so called “state border” according to South Ossetia). The border guards serve under FSB command.

Amnesty International has described the compounds as “militarized border guard bases” in their 2019 report “Georgia: Behind barbed wire: Human rights toll of “borderization” in Georgia”, while the Georgian officials calls them “semi-military buildings“. The EUMM Monitoring Mission identified 19 of such militarized border guard bases in South Ossetia in their October 2018 Monitor Bulletin (pdf).  The bases are a very explicit expression of Russian military presence, often distinctively visible from Georgian controlled territory.

Dozens of times per year locals (mostly Georgians) are arrested and detained by the border guards for trespassing the (mostly unmarked) ABL. The arrested persons generally get transported to Tskhinvali or other stations for detention and a “penalty” that effectively amounts to ransom. Most of the sites have helipads. Below follows an overview per administrative district.

The south western corner of South Ossetia was the scene of tension buildup and shelling of villages in 2008. The eastern portion fell within the 15km JKPF “Conflict Zone” around Tskhinvali.  The Georgian populated area (Nuli, Avnevi and Didmuha) was 100% ethnically cleansed as result of the war, with a total of nearly 1800 displaced Georgians. Traces of the deserted and looted villages can still be seen. A relative high density of military infrastructure has been developed in the southern area of the district between 2009 and 2011.

Java / Dzau is the largest district of South Ossetia consisting mostly of high mountain territory. It also forms the entire South Ossetian border with Russia. The famous Roki tunnel on the border and  the sole access route from Russia, played a crucial role in the Russian invasion in 2008. The western side of Java borders Georgian controlled territory. Prior to the 2008 war the area around Kvemo Karzmani and Sinaguri was Georgian controlled and a community of Georgians still live here in a few populated river valleys. Two checkpoints allows local Georgians to pass to either side, yet since the Tsnelisi/Chorchana crisis, these two checkpoints have mostly been closed.

In the northernmost corner the high Mamisoni Pass, an old mountain passage from Georgia to Russia, known as the “Ossetian Military Road”, passes through the tip of South Ossetia for 1 km. It does not have any connections into South Ossetia and the road is closed. The difficult terrain, the small population and the limited points of potential crossing of the boundary line result in limited presence of Russian forces along the Java District ABL section, compared to other areas. The  district of the capital Tskhinvali is obviously key to the Russian military presence with a large military base in the capital. The district itself hosts the longest section of the Administrative Boundary Line in the populous southern lowlands of the region, often farmland. A complicated boundary line that zigzags seemingly random through the lands of local farmers and between villages. With Georgians and Ossetians living on both sides of the boundary line. In this section of the ABL most of the arrests and detentions happen, as well as most of the “borderization”, meant to separate communities and prevent farmers to reach their land. The presence of security forces is therefore quite strong, contrary to the Java district, but comparable with the southern section of the Znaur district and is mostly located near the ABL.

The Didi Liakhvi river gorge, north from Tskinkvali leading up to Java, was prior to the 2008 war a Georgian populated area under Georgian control. A strategic position where a lot of (pre-war) exchanges of fire took place. Nowadays the villages  are deserted and looted, which can still be seen from satellite images. This area has been ethnically cleansed with more than 9000 IDP’s. Patara Liakhvi river valley in the central-eastern part of the Tskhinvali District was a Georgian populated area as well, which has been ethnically cleansed resulting in more than 6000 IDP’s.

The eastern most district of South Ossetia is the closest to the Georgian capital Tbilisi, a predominantly Georgian populated area, especially along the Ksani river valley, the central river of the district. It is a generally mountainous area, with the one exception to the southern most point extending into the Shida Kartli Pain

The southern point is an area that often raises publicity with borderization and arrests. Also, the ABL runs the closest to the central East-West highway E60/S1 at a distance of just 300 metres.  It is here that two Border Guard stations are concentrated as a clear signal of Russian presence, with obscured observation outposts in the landscape.

In a more recent development, the Russian FSB has been setting up electronic surveillance and observation technology along the ABL. With Georgian civil activists recording aerial footage this has become more obvious and explicit. A few sites have been identified, for example above Khurvaleti village and near Akhalubani village. These sites can autonomously detect visual movement, possibly radio and phone signals. On these sites a special parking site for a mobile radio-peeling unit has been created to intercept radio and phone signals and possibly jamming them based on available Russian military technology. A major Russian military exercise recently exposed this.

More about this later (developing chapter), for now visuals of the site near Akhalubani.

UAV subdivisions of the Russian military base of the 58th army of the Southern Military District in South Ossetia received “Takhion” UAV’s. “Takhion” is designed for aerial day/night reconnaissance with a range of up to 40 km. It is equipped with a thermal imager and a video camera.

[to be continued – work in progress]